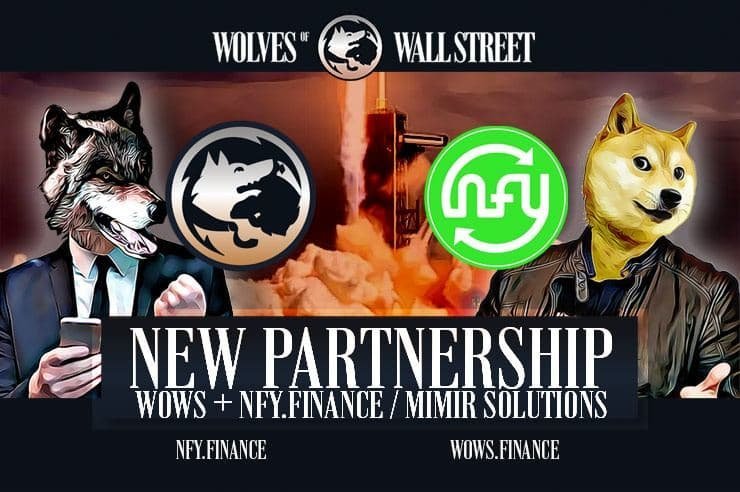 Groundbreaking C-Folio NFT-DeFi protocol ‘Wolves of Wall Street’ (WOWS) are pleased to announce the formation of one of their most important partnerships to date, a strategic partnership with NFY.finance and their owners MIMIR SOLUTIONS CORPORATION.

NFY and WOWS share a common history as both founders have previously collaborated with each other’s protocols. TristanVert, the project lead of WOWS designed the branding and UI/UX that helped launch NFY.finance and JeffX from NFY formed the soft audit on the code to assist WOWS in their initial token launch. Their development paths share synergistic ideas such as using NFTs (for NFY) and SFTs (for WOWS) to create wrapping containers that can hold LP value and other SFT and NFT assets, thereby opening exciting new use cases and innovation within the DeFi sector.

“We are happy to align ourselves with brilliant and creative minds who are unfettered by constraints of what is possible and achievable. We hope to bring our unique take on DeFi, our SFT’s and add value to the MIMIR alliance.” – TristanVert CEO WOWS

MIMIR SOLUTIONS CORPORATION is owned by its four shareholders that owns NFY and is headed up by the well-known developer Cyotee Doge. MIMIR is fast positioning itself as a major player in the DeFi and blockchain scene, having just been announced as an official collaborative partner of the Geometric Space Corp and now infamous Dogecoin Cubesat Space X Launch in July 2022.

WOWS & NFY will actively cross collaborate on new projects under the MIMIR brand. Cyotee and MIMIR Devs will help push through certain new features on the WOWS platform, whilst also working together with the WOWS team to create some shared token pools. Other Ideas include creating unique Wolves / Bois SFT C-folios with special earning powers to buy on the WOWS platform that will represent the lead players in MIMIR namely Cyotee, Jeffex, Halsey and the Beard of Justice to help celebrate the alliance.

Disclaimer: This article is not intended to be a source of investment, financial, technical, tax, or legal advice. All of this content is for informational purposes only. Readers should do their own research. The Capital is not responsible, directly or indirectly, for any damage or loss caused or alleged to be caused by reliance on any information mentioned in this article.

Originally Posted at The Capital