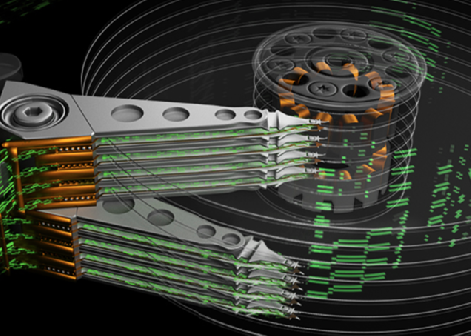 The key to Mach.2’s increased performance is a second set of actuator arms, which can be positioned independently from the first set. Essentially, this makes a Mach.2 “two drives in one chassis.” (credit: Seagate)

Seagate has been working on dual-actuator hard drives—drives with two arms and read/write heads per platter—for several years. Its first production dual-actuator drive, the Mach.2, is now “available to select customers,” meaning that enterprises can buy it directly from Seagate, but end-users are out of luck for now.

Seagate lists the sustained, sequential transfer rate of the Mach.2 as up to 524MBps—easily double that of a fast “normal” rust disk and edging into SATA SSD territory. The performance gains extend into random I/O territory as well, with 304 IOPS read / 384 IOPS write and only 4.16 ms average latency. (Normal hard drives tend to be 100/150 IOPS and about the same average latency.)

The added performance requires additional power; Mach.2 drives are rated for 7.2 W idle, while Seagate’s standard Ironwolf line is rated at 5 W idle. It gets more difficult to compare loaded power consumption because Seagate specs the Mach.2 differently than the Ironwolf. The Mach.2’s power consumption is explicitly rated for several random I/O scenarios, while the Ironwolf line is rated for an unhelpful “average operating power,” which isn’t defined in the data sheet.